When you say “2016,” it sounds benign, a choriamb of grinning “t” and “e” sounds. Looking back now, it seems clear that the rhythm signaled the start of a march. As it turns out, 2016’s most defining characteristic was being too easily divisible. We lost David Bowie, Prince, Leonard Cohen, and George Michael, and we lost major stars in the poetry constellation (or maybe they’ve become the stars) as we mourn poets C.D. Wright, Michael Harper, Lucia Perillo, Brigit Pegeen Kelly, Max Ritvo, and most recently, Monica Hand. Meanwhile, the United States continues to go through turmoil; we face an identity crisis in high-definition, with a surveillance view of the people we are and have been all along. How do we move forward? Can we speak our truth and trust justice? Memorious will be joining other literary lighthouses to shine forward through the dim prospect—we’re co-sponsoring a Writers Resist reading at the Boston Public Library and we hope you can join us there: January 15, 2017, 1:30-4:30.

Many people have written about why we turn to poetry in times of hardship. This year, I’ve watched people answer crisis after crisis by flooding newsfeeds with poems, and poems are an answer. I believe poetry is a real antidote to warfare, and a means to stay alive—every poem, even or especially a poem of outrage, is a sign of alert attention, and of our desire to connect, to organize, to build relationships. I have spent the last month thinking about the books I’m looking forward to in 2017. These are the shields I will be holding up as I join other writers to march against oppression—each is a testament to hope, trust, beauty, community.

Long Soldier, a member of the Oglala Lakota Nation, wrote a series of poems in response to The Congressional Resolution of Apology to Native Americans. President Obama authorized the resolution in 2009, but because he never read the document out loud, and because no tribal leaders were present at the initial signing of the document, many refer to it as the “silent apology.” In Whereas, Long Soldier writes poems that adapt, re-purpose, and defy the official language of the treaty. You can preview some of the poems on the Pen America website. Here’s an excerpt from “Whereas”:

WHEREAS I tire. Of my effort to match the effort of the statement: “Whereas Native Peoples and non-Native settlers engaged in numerous armed conflicts in which unfortunately, both took innocent lives, including those of women and children.” I tire

of engaging in numerous conflicts, tire of the word both. Both as a woman and a child of that Whereas.

In these poems, Long Soldier highlights the instability and changefulness of language, and she also shows the way that governmental texts, laws, resolutions, and treaties can be literally imposed on places, and how those texts in fact alter the natural world. I’m curious about how Long Soldier’s collection will take shape, because I’ve encountered the poems in so many different formats, from the recordings on Fishhouse.org to the photos of the “Whereas: We Respond” project she installed at the Pine Ridge Indian Reservation. I believe that the spirit of resistance Long Soldier has nourished in this project is kindred to the protests in Standing Rock—along the same river. Long Soldier’s work is a poetry to break all boundaries, and I can’t imagine it contained, unless it will exist both on the page and as the means to galvanize audiences, to arrange happenings.

Contributor Tarfia Faizullah, Register of Eliminated Villages (Graywolf)
Update: this book will arrive in 2018, not 2017!
As the title suggests, Faizullah’s vision is one that takes in entire communities, and one that works to re-inscribe and preserve the personal stories of threatened histories. Her first book, Seam, featured a sequence of poems centered on her experience interviewing the birangona, Bangladeshi women who were raped by Pakistani soldiers during the Liberation War of 1971. The poems I’ve seen from her second book are more highly lyric and fragmented, but true to the poems in her first book, they confront the world’s atrocities with a disarming (and prevailing) music.

Here’s an excerpt from “Register of Hunger,” which you can find over at Hobart:

broad, oceanrun closets of our
lives, in which we assume we can leave

You can also read one of Tarfia’s poems in Memorious Issue #10.

Contributor Marc McKee, Consolationeer (Black Lawrence)
There is no poet I turn to for consolation more than Marc McKee. Next year, Black Lawrence Press will be publishing his third full collection, Consolationeer. No one else would know how to re-structure market forces in such a way that consolations—the things you bid for—boost the soul. Reading Marc’s poems never fails to restore my fierce affection for people and the planet. Here’s an excerpt from the poem “Recharger”:

On our trek through this tunnel
overgrown with spoons
licked into blunt spears, the intercessions
of various music are stars
luminously breathing
across strings of river.

You can also read one of Marc’s poems in Memorious Issue #24.

Contributor Gabriel Fried, The Children Are Reading (Four Way Books)
Many of you might know Gabe not only as a poet but also as the editor of so many beloved poets, including many Memorious authors like Gabrielle Calvocoressi, Sydney Wade, and Kimberly Johnson. He is a person who champions other writers faithfully, and I couldn’t be happier to see that his new book will be published by Four Way Books, a press renowned for the kind of care and dedication to its authors that matches his own. Gabe’s poems have the sonorous quality of someone re-telling ancient myths, of calling us back to the movements of the heart. We published Gabe’s poem “Pan” in Memorious Issue #20. 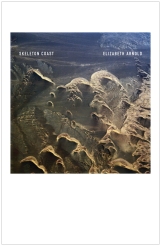 Next month, Elizabeth Arnold will release her fifth book of poems, Skeleton Coast, from the impeccable Flood Editions. Elizabeth Arnold was my professor at the University of Maryland, and her seminar taught me to love poets like Frank Bidart, George Oppen, Louise Glück, Lorine Niedecker, and Basil Bunting. She also edited Mina Loy’s lost novel Insel. Maybe you can see, as I do, how this assembly of influences points back to the particular genius of the one who loves them all. By my lights, Arnold has one of the most interesting sonic palettes going—her poems read like shining desert fragments or waves through tide pools or jagged canyon echoes. Here is a description of Skeleton Coast by poet Jennifer Clarvoe:

These poems alternate between spare, psychological explorations and more expansive descriptions of difficult terrain: the Sahara, Egyptian ruins, and the dry riverbeds of the Skeleton Coast in the title sequence. The goal is to read what is truly there, as if we are all wrecks and deserts, to understand our dislocation from the forces that have made us and the sources that might feed us. What is buried is both violence and clarity, “like a fault deep in the ground // with its / inexact though statistically measurable need // to relieve stress over time.”

I can’t wait to read this book!

2017 will also be a banner year for debut poetry collections. Here are a few that I’m excited about:

Contributor Jacques J. Rancourt won the Lena-Miles Wever Todd Prize from Pleiades Press for his book Novena. I’ve been reading and loving Jacques’s poems for a few years now, and we published his work in the latest issue of Memorious. I am looking forward to this collection (go team Pleiades!!).

Carl Phillips selected Airea D. Matthews’s book, simulacra, for the 2016 Yale Younger Poets Prize, and it will be published by Yale University Press. These poems are astonishing, and so layered with sonic patterns they will rearrange your brain! Listen to this incredible crown of vowels (plus every other sound) in this excerpt from “Sexton Texts During the Polar Vortex.” You can find more selections in Four Way Review:

(1/5) Every day, my father fell six
feet into a vat of tar. Burned
his neck, ankles, veins. We
saw his viscous shoeprints
blanched blisters and salve.
Hours after, when
he touched any door-
knob, steam rose
from the brass.

Kaveh Akbar is the editor of Divedapper, and one of my favorite poets to follow on Twitter because he shines the spotlight on so many great poets. His chapbook, Portrait of the Alcoholic, will be published by Sibling Rivalry Press, and is due to hit the shelves in January. His first full length collection, Calling a Wolf a Wolf, will be published by Alice James Books in 2017. Here’s an excerpt from “Fugu,” which you can find on Gulf Coast:

I heard Erin Adair-Hodges read her poems this past summer, and she brought the house down. Her first book won the Agnes Lynch Starrett Prize, and will be published by the University of Pittsburgh Press. These poems are not merely witty, they’re outrageous, feminist, and electrifying. Here’s an excerpt from “Of Yalta,” from The Georgia Review:

I’ve been rejected in two centuries, lonely
in millennia, pride of my generation.
This old story. Women who like men
love them until the men are holes

and the women turn back to bone.
Every time a man left me, I burned
something I loved until I was left
with only the gear knob of a Dodge Omni

and wine stains round my mouth.

I’d like to give a shout-out to a few books that hit the shelves at the end of 2016:

Rosalie Moffett: June in Eden, from Ohio State University Press. Here’s an excerpt from “Weird Prayers” which you can find on Blackbird:

I address the terns. Really,

I address my own hand, curled into a horn.
I tip it up. I say

I am caught floor-side of the trapeze net

Contributor Catherine Pierce: The Tornado is the World, from Saturnalia Press. We published one of Catherine’s Tornado poems in Memorious Issue #22. Also, check out this terrific videopoem of “The Mother Warns the Tornado.”

Matthew Olzmann: Contradictions in the Design, from Alice James Books. Here is an excerpt from “Astronomers Locate a New Planet”:

On Earth, when my wife is sleeping,
I like to look out at the sky.
I like to watch TV shows about supernovas,
and contemplate things that are endless
like the heavens, and, maybe, love.
I can drink coffee and eat apples whenever I want.
Things grow everywhere, and so much is possible,
but on the news tonight: a debate about who
can love each other forever and who cannot.

Finally, let this blog post also be a love letter to all of the editors who are working to publish this work (and as we all know, not for fame or money). These are brilliant people who are making this poetry possible, and their commitment to promoting these poets may be the most radical thing of all. Bring on 2017!!

Assistant Poetry Editor Katy Didden is the author of The Glacier’s Wake, which won the Lena-Miles Wever Todd Prize from Pleiades Press, and was published in 2013. She has published poems in many journals such as Image, Poetry, 32 Poems, and The Kenyon Review, and her work has been featured on Verse Daily and Poetry Daily. She was a Hodder Fellow at Princeton University, then served as a Visiting Assistant Professor in the MFA Program at the University of Oregon. She is currently an Assistant Professor of English and Creative Writing at Ball State University.