According to the foreword to A Basket of Apples, Shirley Faessler’s stories began as tales told around a kitchen table. Faessler ran a rooming house for actors in Toronto, and would entertain the entertainers with stories of Yankev the Bootlegger, Henye the Hunchback, and Raisel the Galloping Consumptive. This “witty and uncompromising writer”—as she was described by Alice Munro—spoke of a time, place and people that have slipped away: the 1920s and ’30s immigrant Jews of Toronto’s Kensington Market, who lived and worked, who teased and danced, who loved and married and mourned, who sipped tea through sugar cubes, who spoke accented English and passionate Yiddish.

I can never know this world, but am hungry for it because it is close to the world of my grandparents and great-grandparents. The Jewish side of my family is from Latvia and Galicia (a region that is now part of Poland and the Ukraine), whereas Faessler writes of Rumanians and Russians, but I try to imagine my people brushing up against hers—perhaps my great-grandmother knew of Mottele Blabbermouth or Misha Liar. Perhaps my great-grandfather sometimes joined “his buddies in the back room of an ice-cream parlour on Augusta Avenue for a glass of wine, a game of klaberjass, pinocle, dominoes.” Or perhaps not. Maybe the Yiddish spoken by Faessler’s characters would have been incomprehensible to the Yiddish speakers in my family. And perhaps it doesn’t matter, because Faessler’s stories are, quite simply, moving and funny and dramatic.

They take place in kitchens with peeling linoleum, around dinners where tables aren’t set but cutlery is tossed down, where the burnt edges are scraped off the honey cake. The language is as plain as the setting, but the modest people that populate the book have huge hearts, surprising the reader with their loyalty and fervor, and the dialogue crackles with humor:

“I don’t even get to drink l’chaim to the couple?” Haskele protested.

Shirley Faessler was sixty years old when she published her first story in the Atlantic Monthly in 1967. She went on to publish a novel that apparently gave her difficulty (what novel doesn’t give its author difficulty?), and a collection of stories that was universally praised, even by the likes of Munro. Her work emerged from a lost world in literature, when an editor might drop by a writer’s house to ensure that she doesn’t burn her manuscript, and when a writer would give typewritten pages—the only copy of the manuscript in existence—to the editor to carry home. 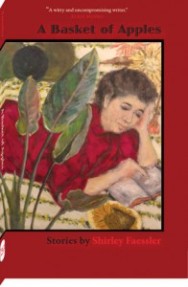 ut of course, so it goes in this life (as Faessler’s sly and resigned narrative voice might say), her work fell out of print for years. When my friend, who is Faessler’s niece, handed me a copy of this collection at a dinner party, I had never heard of Shirley Faessler. Her collection is only available now thanks to the dedication of her editor, Lily Poritz Miller, and Bill Gladstone, a publisher who created Now and Then Books to preserve Toronto’s Jewish History.

Many of the stories in A Basket of Apples are told from the perspective of Sarah Glicksman, the author’s alter-ego, raised by a Rumanian father and Russian stepmother. These stories are linked, and are about the links between people: an aunt and her long-lost nephew, a stepmother and orphans, sisters and brothers. Faessler is a particularly keen observer of flawed marriages that begin with a marriage broker and end when one partner dies. She takes a long, honest look at the way Sarah’s father, who has all the economic power, is capable of harming his wife:

“More than once with one swipe of his hand my father would send a few plates crashing to the floor and stalk out. She’d sit a minute looking in our faces, one by one, then start twirling her thumbs and talking to herself. What had she done now?

“Eat!” she’d admonish us, and leaving the table would go to the mirror over the kitchen sink and ask herself face to face, “What did I do now?””

But Faessler also shows the toughness of Sarah’s stepmother, the miraculous way this woman maintains her wicked humor and sweetness. And she shows the vulnerability of the husband, who despite his temper, will soak his wife’s feet and “scrape away with a razor blade at her calluses and corns.”

Faessler is also marvelous when she writes about the ways mothers and daughters love and irritate each other:

“Why doesn’t she cut down on the bread, does she have to drink twenty glasses of tea a day? No wonder her feet are sore, carrying around all that weight…” reflects Sarah about her stepmother, only to state, a few pages later: “She breaks my heart. I want to put my arms around her, but I can’t do it.”

This relationship between stepmother Chayele and her children is the heart of the book. Tragedy doesn’t strike in these pages, but there are devastating scenes of Chayele’s stepchildren arguing over how to tell her that their father, her husband, has died—after he refused to inform his wife that he had cancer in the first place, in an attempt to spare her feelings. 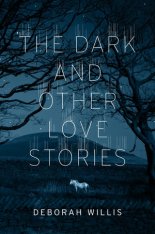 “What kind of life is it to be alone?” this book asks, then starkly shows that when a wife dies, the husband will mourn her and remarry. But when a husband dies, the women deal with a more profound loneliness, struggling on in houses that are too big for them, with housework they are no longer inspired to do, relying on children who nag and adore them but are unable or unwilling to take them in.

This is a terribly realist book, unapologetically specific to its setting, but also a book that shows us humanity at its most universal. Through its tender and ironic depictions of Auntie Chayele, Pinnie the Intellectual, and other characters who are somehow both larger-than-life and humbly real, these stories capture the deep love and heart-stopping grief of ordinary lives.

Deborah Willis was born and raised in Calgary, Alberta. Her fiction has appeared in The Walrus, The Virginia Quarterly, The Iowa Review, Lucky Peach, and Zoetrope. Her first book, Vanishing and Other Stories, was named one of the the Globe and Mail‘s Best Books of 2009, and was nominated for the Governor General’s Award. Her second collection of short stories, The Dark and Other Love Stories, is out now.