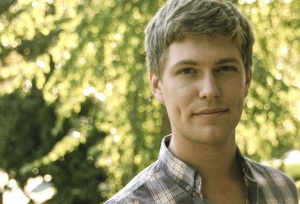 Richie Hofmann’s forthcoming poetry collection, Second Empire (winner of the 2014 Beatrice Hawley Award from Alice James Books), is ripe with beautifully confident lyric meditations. Formally adept and precisely phrased, these delicate poems allow the reader to consider the weight of loss, desire, and the shifting nature of empire alike. This is a collection that addresses both the personal and the historical, blending that binary and ultimately arguing the self is more communal than it is solitary.

Hofmann is the winner of a Ruth Lilly Fellowship from the Poetry Foundation, and his poems have appeared or are forthcoming in The New Yorker, Poetry, The Kenyon Review, and Ploughshares. A graduate of the Johns Hopkins University MFA program, he is currently Creative Writing Fellow in Poetry at Emory University. 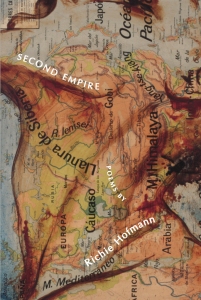 I’ve always admired how the line breaks, whitespace, and short declarative sentences in your work carefully slow the reader down. Why are you drawn to this particular pacing in a poem?

One of the things I love about poetry is that it demands a particular kind of attention—and rewards attention. I think that’s rare in our world, in which everything feels so fast-paced, so abbreviated and truncated, so multi-tasked. It’s probably impossible to control how a reader reads your poem—every one reads differently, or imagines the voice of the poem differently—but the features you mention are tools I hope ask a reader to pay closer attention. I like to think of poems sometimes as objects for contemplation—I imagine an exhibit at a museum, in which the elements of display around it—the kind of pedestal or vitrine, the color of the walls—all contribute to how you might apprehend and understand the object. White space, punctuation and line breaks (which are also a form of punctuation) help define and create the space in which a reader comes to the poem.

In “First Night in Stonington” the speaker claims, “So rare in this country to pace the streets/ of another century.” Could you speak to how American history (or maybe notions of history in America) have influenced you work?

Many of my poems are interested in history—not just the American past, but European history, as well, and the history of art and music. “Second Empire,” as an adjective or historical term, usually refers to France under Napoleon III (1852-1870), a period known for, among other things, Haussmann’s “renovation” of Paris, and the building of the Palais Garnier. While I did put a Palais Garnier poem in the book (“At the Palais Garnier”), I was most drawn to the title, “Second Empire,” because of how it suggested that even things we think of as monumental can be replaced. That there could be a second also implies (as history has often proven) that there could be third or a fourth, as well. As for America, we are living in a sort of changing empire today, and I’m interested in the way that fragility—political, artistic, and personal—affects our identities and relationships, our artists and our lovers.

I love love. I love speaking to someone privately in a poem that also speaks to others. As a reader, I love overhearing that private speech. I love poems that enact desire, through their forms and withholdings and denials. The book is, for me, about the consuming uncertainties of love and sex. Most of the poems in the book take the form of the sonnet—the traditional form of the love poem. Three of the book’s elements—sex, history, and the sea—seem to be metaphors for finding connection with others that affirms the self, that reminds you you are part of something bigger, something older, something wilder.

Music—particularly opera—figures prominently in the collection. As such, it seems fitting that “Old World Elegy” won the 2013 Art Song contest and was scored by composer Brian Baxter. Could you speak a little bit about the experience of listening to your poem turned into song?

I care deeply for music—I spend most of my time listening to, and learning about music. You’re right—opera I love especially, and musical theater and vocal music. Texts are powerful and music is powerful—but in song you have both verbal and musical elements working together. To have a poem of mine win the Art Song Contest—it was an incredible experience: Brian Baxter’s beautiful setting of the poem, and the live performance of it at the Poetry Foundation, the gorgeous venue, the singer, the quartet—all incredible. People say there are “musical” elements to poetry, which may be true, but they’re nothing like real music lifting poetry off the page and into the ear. Brian’s interludes between the sections of the poem add so much to the experience of “Old World Elegy,” I wish I could put them in the book, too. “Old World Elegy” is going to get a studio recording this fall, I think. And I’ll be collaborating with Brian Baxter on another venture soon, too. Memorious’s contest not only advances the tradition of art song, but also brings together artists from realms that don’t often connect enough. That’s the best part.

What are you working on now?

I’m starting to write the first chapter of my dissertation for my doctorate in English at Emory University on twentieth-century poetry—I’m focusing on questions and texts that have meant a lot to me as a reader and as a writer, about music and opera, theatricality, lyric form, and authority. The best part, for me, is reading and re-reading poems by W. H. Auden, James Merrill, Anthony Hecht, Louise Glück, Rita Dove, and others.

I’ve also been working to procure interviews with poets I love and to develop classroom materials related to their work for Lightbox, a new online educational resource for students and teachers that I’ve just launched with my friend, the poet Kara van de Graaf. It’s been a lot of work, but also such a pleasure, especially to read the responses from the poets we’ve interviewed and to think about how we might approach teaching the work. We’ve been fortunate to get to ask questions to established writers, like A. E. Stallings, Maurice Manning, Carl Phillips, Mary Jo Salter, and Claudia Rankine, and to writers whose first books we’re excited to dive into, like Rickey Laurentiis, Ocean Vuong, and Solmaz Sharif. I really hope teachers will use these interviews and the accompanying in-class activities, discussion questions, and writing prompts in their classrooms, and that writers of all ages and levels can use these materials for self-study.

Interviewer Keith Leonard’s first collection of poems, Ramshackle Ode, is forthcoming from Houghton Mifflin Harcourt in April 2016.He is also the author of a chapbook, Still, the Shore, published by YesYes Books.