Michael Bazzett’s You Must Remember This (Milkweed, 2014) is a book of contradictions. The poems contradict themselves, negating what they have already told the reader, so that in “A Woman Stands in a Field,” the narrator implies a stand of oak trees with “Perhaps she is/ searching for acorns,” then pulls the ground out from under us with the reversal, “upon closer inspection, it turns out the trees are/ not even oaks.” This negation, or absence, is in play throughout, constantly asking readers to imagine the lack of something: ink that can’t be seen but that whispers to a note’s recipient, a divorce acted out in mime court thanks to “the unspeakable nature” of the couple’s differences, or a list of what the night is not in “Clockwatcher.” The poems’ wordplay mixes diction, juxtaposing the colloquial with the mythic, so the phrase “how// utterly it sucked” describes the situation of Odysseus lying in wait in the Cyclops’ cave, bringing the mythic closer to our own lived idioms and breathing new life into it. The poems blur boundaries between the domestic and the surreal; in “The Orangutan,” a family discovers, to their embarrassment, that their new orangutan is actually electric and not in fact alive, and has been hiding its uneaten bananas behind the furnace. In fact, orangutans make multiple appearances, echoing disturbingly and hilariously throughout the book. I loved entering the inventive world of You Must Remember This and being brilliantly conned by the speakers of the poems as they played fast and loose with the truth.

You Must Remember This was published as the winner of Milkweed’s 2014 Lindquist & Vennum Prize for Poetry. Michael Bazzett’s poems have also appeared in many journals, including issue 23 of Memorious. He is the author of the chapbooks The Imaginary City (OW! Arts) and The Unspoken Jokebook (Burning River Press), as well as the winner of the Bechtel Prize from Teachers & Writers Collaborative. He kindly answered my questions about putting together a full-length manuscript, the artistic potential of denial, and poetic family trees. 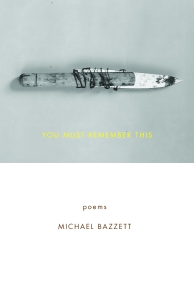 Given that the prize asked for exclusivity, and that what I considered to be “my book” manuscript was already submitted to a half dozen presses, I decided to come up with an utterly new manuscript for Lindquist & Vennum. I had a small core of what I thought might become “my second book” and I gave the pages to her, along with about 160 other pages of poetry, some old, some brand new, about 200 pages total. I included some new work almost as a lark. She spent two days reading and sifting through the work, all the while examining a number of books we admired, and then she composed the book as a mix-tape, cutting it down to 70 pages in the process. Even the title was hers.

The process was simultaneously a huge relief, a leap of faith, and a little frightening. She included poems I’d never even submitted, let alone considered putting in a book, and the truth is I felt quite vulnerable putting it out there. (Well, not that vulnerable. Who ever thinks they’ll actually win?) But it gave me fresh eyes for the work, and a lot of the juxtapositions and threads she discovered certainly helped the whole transcend the sum of its parts. She also didn’t include a handful of “solid poems” that had found homes at great journals (something which always clouds my judgement). They didn’t fit her vision, so they had to stand in the hallway and listen to the party. I think I trimmed three poems, after the fact, but other than that, the shape of the collection is her work completely.

She’s always my first reader, (she writes fiction, and I return the favor as her line editor), but this was a true gift from a true partner. At 1-0, she can now retire undefeated as a poetry editor.

The chapbook was much smaller, and I simply used the title (The Imaginary City) as the defining metaphor. I asked myself: Could this happen in the imaginary city? If so, then it found a place in the streets & architecture of my vision-world. Which is like ours, but weirder.

There’s a lot of negation and denial in You Must Remember This: the loss or absence of sight/sound, as with the silent ink in “The Sinclair Gift Emporium” and the loss of sight in “The Last Expedition” or the court case told by mimes; and the denial of existence or experience as with “Memory” in which the speaker denies having a brother he has already told the reader about. Can you talk about the creative possibilities of denial or negation?

This is an intriguing observation; I guess I’d never thought about it much before. Robert Hass does something like this in a little poem I truly love called “The Problem of Describing Trees” which starts with the line, “The aspen glitters in the wind” and then sort of revises itself into a very different space right before our very eyes and ends with the stanza:

the aspen doing something in the wind.

I think denial is inherent in trying to use words to speak the unspeakable. Sometimes the world seems remarkably unaware of its need to be explained.

Your book plays with language and diction, moving between very heightened and musical language and a more casual/slangy expression, sometimes within the same poem (I’m especially thinking of “Cyclops,” which contains the phrase”how/ utterly it sucked the hear the oaf stirring in his stupor,” which manages to be both mythic and colloquial at the same time). What function does wordplay serve in your poems?

Often, in initial drafts, sound drives sense for me. I’ll come home from a walk with the sound of a line in the soles of my shoes and I’ll grab an envelope as I walk into the door to write it down. Often these lines don’t make it to the final draft, but serve as the pit that feeds the fruit. I usually only learn what a poem’s about once I’ve spent some time eavesdropping on it.

And it’s true I’m fond of the merging of the mythic and the colloquial. I mean, I love the idea of Athena and Odysseus sharing asides at the back of some bizarre faculty meeting. Or the Mayan jaguar-god coughing up a tremendous hairball. Or someone unwittingly bumming a cigarette from God, while waiting for the bus.

In your writing, how does conscious choice meet up with that idea of “eavesdropping,” or letting yourself create without knowing what you’re doing yet?

I often write poems because I want to uncover how they end. I follow the sound of the words — which become footprints somehow — and listen for a rustle in the brush. I trust that a real animal made those prints, even if I don’t fully know what kind of animal it is. When this happens, I know the poem’s smarter than I am, and that’s good. It has a life of its own that I try to glimpse with my shaky hand-held camera made of words. Sasquatch poetics.

Conscious choice comes in later, mostly during revision, where I maybe see a connection that intuition led me to, blindfolded, as it were. Then I pare away excess, and try not to do too much damage, etc.

Your poems’ use of orangutans (especially “The Orangutan,” which features an electronic version in a very surreal domestic situation) reminded me of James Tate’s ape poems. If you were to draw yourself a poetic family tree, what poets do you see yourself descended from? How do they come out in your work?

Oddly, I’ve discovered a number of influences after the fact. Charles Simic, James Tate, Francis Ponge, George Saunders. I actually started reading all of the above after people noted a perceived influence on my work. Sometimes, as a high school teacher, I reread texts so often I feel out of the loop, so it’s been a wonderful way to discover writers with a shared sensibility. I guess these after-the-fact influences that arrive via the zeitgeist would be the roots, feeding the tree from below.

But, as far as the tree itself:

There would be a Polish branch, where Wislawa Szymborska and Zbigniew Herbert would roost, with dark jackets and glinting eyes and the intelligence of crows. (I think my soul might be Polish.) And there would be a dusty evergreen Portuguese branch where José Saramago & Fernando Pessoa would settle into the lavender dusk, like owls. Virginia Woolf’s syntax would inform the pattern of the branches. Emily Dickinson would form the heartwood of the trunk, Homer the pith. (I think I’ve spent more hours reading Dickinson than any other poet.) Whitman would be photosynthesis itself, transforming sunlight into food. The Scottish poet Robin Robertson would be a broken limb, heartwood opened to the light.

Russell Edson would be in the tree, just sitting there, wearing a cardigan.

Novelists are big for me: Ishiguro, Saramago, Ellison, Garcia Marquez, Gordimer, Woolf, Morrison. I love the deadpan creepiness and psychological resonance of Patricia Highsmith. And Pu Songling’s “Strange Tales from a Chinese Studio” is a book I return to again and again. I love the imagination of Ray Bradbury. The brilliant wreck of Philip K. Dick. I’ll end with Heaney, as his three word definition of poetry is taped to my wall: Exact, Truthful, Melodious.

And finally, what are you working on now? What’s next for you?

I’ve recently finished a translation of the Mayan creation epic, the Popol Vuh, which will be coming out later this year with Milkweed Editions; I’m finishing up the introduction right now. It was a fascinating ride, and as far as I know, this version will be the first verse translation in English.

I have little book of linked prose poems I’m polishing up about a tribe of “others” who live among us, almost invisibly – it’s part reflection on homelessness, part Jane Goodall primate study, part Sasquatch fable, part ghost story. I’m also working on a manuscript tentatively called untitled & invisible, consisting solely of poems I forgot to write. Or maybe I’ll call it Self-Portrait as Another Man. In any case, I’m planning to have iTunes download it onto everyone’s machines for free. I imagine that will be very well received.

– Christina Rothenbeck is the author of two chapbooks, Girls in Art and the forthcoming Erasing Innocence, both from Dancing Girls Press. She is a doctoral student at the University of Southern Mississippi’s Center for Writers.

For original poetry, fiction, and art song, visit our magazine at www.memorious.org.