Angela Ball’s poems and translations have appeared in The New Yorker, Atlantic Monthly, Colorado Review, Denver Quarterly, Field, Partisan Review, Ploughshares, Poetry, The Southern Review, and elsewhere. She has published six books of poetry including Quartet (Carnegie Mellon, 1995), the Night Clerk At the Hotel of Both Worlds (Pittsburgh UP, 2007), and, most recently, Talking Pillow (Pittsburgh UP, 2017). The Director of the Center for Writers at the University of Southern Mississippi, Ball has received both the Mississippi Institute of Arts and Letters Award in Poetry and the Donald Hall Prize from the Association of Writers and Writing Programs. She first appeared in Memorious in an interview in Issue 19. She recently answered questions about her new poetry collection, which centers on the loss of her longtime partner and “explor[es] the vagaries of human experience and the limitlessness of love.” 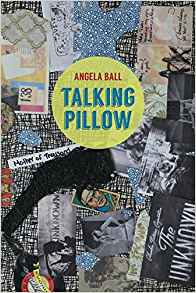 This collection is dedicated to your late-partner, Michael. Was grieving the loss of him part of the project of this collection, or did you find that it was impossible to not write about him?

I had no idea that I would write so many poems about Michael. They were a form of active grief, launching my thoughts and feelings into the emptiness that had engulfed Michael and me. In addressing the paradoxes of his absence, I found his presence. He was again a fact of the world.

In poems like “Intercourse After Death Presents Special Difficulties” and even “Elegy” the heaviness of your grief is accompanied by humor—an ability to recognize and report the absurd—in the heaviest moments. Can you tell us more about the function of humor in this collection?

I have long thought that absurdity (or, at the very least, incongruity) is our constant companion. The cold eye in me felt the absurdity of the events as they took place. I think that in America incongruity has often displaced history—towns rev and die, concatenations of energy expended and dispersed. An ethic of individualism doesn’t lend itself to planning or permanence. I think of Louis Simpson’s notion of American poetry having to stomach “Rubber, coal, uranium, moons, poems” and J.D. McClatchy’s wonderful observation about James Tate’s poems capturing “the surrealism of the every day.” I want my work to welcome telling details, no matter how mundane, ridiculous, or seemingly inconsequential—and celebrate the beautiful surprises that arrive when we least expect.

I know that your influences include Elizabeth Bishop, the New York School poets, and Anna Akhmatova. Are there any poets who were particularly influential to this collection?

My poems hold many debts. My work is very conscious of the life given to it by other poems, and I hope that it forms part of what Wallace Stevens called “the long conversation between poets.” Stevens is certainly important to me, and William Carlos Williams, too. A brilliant teacher and poet, Stanley Plumly, has said that most contemporary poets follow either Williams or Stevens. I think that at first I hearkened to Williams (and to another close listener to American speech, James Wright), but I’ve more and more turned my ear toward Stevens and the ways in which “things as they are are changed upon the blue guitar.” And before those two there are the giants, Emily Dickinson and Walt Whitman: two faces of the infinite. I think often of Rainier Maria Rilke’s Duino Elegies, with their generous loneliness and somewhat paradoxical insistence on direct statement. And Pablo Neruda’s Odas Elementales, that, as Philip Levine tells us, honor “the things of every day—a suit, a pinch of salt, an onion, a pair of socks, the color green—so as to create an event of cosmic significance. . . .” Adam Zagajewski is the contemporary poet whose work I most revere, both for its clear-sightedness and its constant recognition of the numinous and its beckoning mysteries.

There is a note at the end of the collection citing a Wikipedia entry for nitrogen narcosis from which you derived lines for “Springtime.” The range of interests within the collection seems to me quite vast. Are there other topics—science, history, film, etc.—that informed Talking Pillow?

“Only connect,” E.M. Forster famously said. I think that everything connects everything—if only we discover the points of contact. Poets are natural dilettantes—I find it compelling to seek out random facts. When two discourse worlds are placed side by side, one or both may be metaphysically transformed. In the rush of days, we are more and more likely to find ourselves and/or things around us in unlikely juxtaposition: we are patient winemakers operating state-of-the-art computers, and Isaak Walton emulators digitalizing the nocturnal movements of deer. Because my late partner was a well-informed aficionado of films—especially early to mid-20th-century films, and especially film noir—that preoccupation is part of the poems’ aesthetic. I think that Michael’s interest in films began—like my interest in poetry—as an escape from loneliness. Once we found each other, movies were a home we shared.

We often end the interview by asking about a current or future project. Are you at work on something new? Can you tell us a little bit about it?

I am writing poems for a new manuscript called “Under the Dark Marquee.” It continues to elegize Michael, and it extends the use of filmic analogies and jump-cut techniques that got started in Talking Pillow. I think that Paul Valery’s famous comment about poems can also be said of subjects: that they are “never finished, only abandoned.”

Sara A. Lewis is associate editor of Oxford American and a contributing editor of Memorious.org.