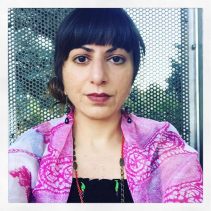 Carolina Ebeid’s debut poetry collection, You Ask Me To Talk About The Interior, continually draws the reader in, addressing her several times throughout the book and using luscious imagery to evoke a sense of intimacy and familiarity. There are the usual topics—love, death, God—but they exist in a world of violence that continually bursts out of the book’s pages. A meditation on language pivots around a picture of a man throwing a rock. Biblical language is twisted in on itself. Metaphors become machines that produce more metaphors. Writing about the everyday things of life in “Small Hall of Symphony”—the wonder of a telephone, the Doppler effect as heard in an ambulance’s siren—Ebeid says they “describe an idea of us to us,” and the same could be said of this collection, which manages to find connections between seemingly disparate ideas. Throughout, it is the simultaneously playful and sincere nature of Ebeid’s writing that carries the reader through and fulfills the book’s promise of intimacy.

Carolina Ebeid’s work has appeared widely in many journals, including Issue 8 of Memorious, as well as The Kenyon Review, Crazyhorse, jubilat, Gulf Coast, Poetry, and many others. She holds an MFA from the Michener Center for Writers, and has won awards and fellowships from the Stadler Center for Poetry, CantoMundo, The Bread Loaf Writers’ Conference, and the Academy of American Poets. She was granted an NEA Creative Writing Fellowship in Poetry for 2015. You Ask Me to Talk About the Interior was published this year by Noemi Press as part of their Akrilica Series. Below, she discusses the poetic “I,” her thoughts on rhyme, and how to balance different kinds of poetry.

I want to start by asking about form: You Ask Me To Talk About the Interior uses many different forms, including several prose poems and a ghazal. How do you approach form when you start writing? How does form influence your work in general, even when not writing in a standard or received form?

I have a deep admiration for poets who try working in received forms—especially older or more obscure traditions. It makes use of one’s mathematical mind, that kind of attention to music. I guess what I like about the poems of say Katy Didden or James Arthur, is how the poem glows with that antique patina, all while renovations to the chosen form are taking place. I

don’t often look to traditional forms, however, when I begin writing a poem. I can imagine how much less anxiety I would experience over a poem (should I end here? how do I know when the poem is finished? how should it look on the page?) if a certain number of syllables and lines were already prescribed to me. Like most poets writing alongside me, I write in free verse trying to find an “organic” form for the given poem. I know I don’t have a full understanding of how the idea of form influences my work. The image that comes to mind is that of a small fire I am trying to control with a container like a lantern. The poem needs a form so that it does not fizzle out or burn the place down. I resist Robert Frost’s dictum about writing in free verse being as ludicrous as playing tennis with the net taken down. I prefer that other concept he draws in “The Figure a Poem Makes.” He said, “Like a piece of ice on a hot stove the poem must ride on its own melting.” I’m in team ice-cube.

There are a lot of recurring ideas throughout the collection, from the “Punctum” prose poems to references to Shakespeare’s Juliet to your use of grammar as simile or metaphor —a la “Punctum / Metaphora” and your phrase “tangle of syntax.” What about these ideas kept drawing you back to them again and again? Were there other “Punctum” poems that you cut or other ideas you liked that had to be removed to keep the collection from overflowing with ideas?

The “Punctum” poems, for the most part, belonged to the essay I wrote as introduction to my MFA thesis. These puncta definitely went through a distillation process to become poems, though I thought each should keep the structure of prose. And you are right; these pieces do make references to grammar and speech, and the important concept of metaphor does appear again and again. The original piece was a personal essay about language, about metaphor, about my parents and their exile-hood and immigrant-hood. It’s an essay I am always writing. But in You Ask Me to Talk About the Interior, I am more attracted to the figure of the “punctum” than I am to the idea of it. The hole, puncture, wound. My book considers a photo (which I don’t include, only describe) of a man fighting the Israel Defense Forces in the West Bank. He throws a rock. If I perform an emotional reading of the photo as Roland Barthes instructs in Camera Lucida then that hand-holding-the-rock becomes the punctum for me, the detail that pierces through to reach and forever wound me. I wanted this figure to recur throughout the work without my having to draw any conclusions about it.

You use a lot of religious imagery throughout in a way that is neither wholly irreverent or entirely devotional, twisting Biblical passages into a mirror-image of themselves, as in the  lines “she runs / through a grass, / larkly” in “Veronicas of a Matador.” How do religious ideas or language influence your work more broadly?

Maybe that’s exactly where to find me: between irreverence and devotion. There is something about the ancient rhythms of Scripture, as it comes to us through translation, that I find intoxicating. The repetitions, all that anaphora and epistrophe, all those instances of “and” or “shall.” The Bible is a collection of incomplete texts made of songs, stories, laws, all of which describe an idea of us to us, an expansive idea full of holes, and hives, and strange fields that we can’t fully apprehend. It describes a world while making a world. That’s what poetry is like to me.

How do you balance moments of insight in your poetry—“I continue to believe poetry has revolutionary power” in “Punctum / Sawing a Woman in Half”—with the need to have clear, strong images?

Ezra Pound identifies three kinds of poetry: melopoeia (led by music/emotion), phanopoeia (led by image/imagination), and logopoeia (led by the intellect). I’m happiest when I can keep these three birds in the same cage. Logopoeia escapes nimbly to some far off airport in someone else’s poem. At the moment, in my work, I’m feeling a distinct lack of balance (especially) between assertion and image. I tend to keep a notebook (a physical one and an electronic one) where I collect words, phrases, discarded lines, and right now, almost all of these work in the service of images. When I was younger, a friend told me that my poem was being crushed by the weight of too many nouns! I have no ambitions to work with images the way a photographer does. No, my chosen material is language, it is language (all its gears) that will call up those mental pictures in the head.

Can you talk a little about the “I,” especially in regards to “Soul out of a Magician’s Hat”? What are your feelings about the “I” in poetry today? How is your own playful use of the “I” informed by that?

My feelings about the “I” in poetry today: The I in Mallarmé’s “elocutionary disappearance of the poet,” the delicate I of Sappho, the I’s cabinet of wonders, the I’s blabbering Whitmania, the I at the end of a street or a century of colonial rule, the “supposed person” of Dickinson’s I, the I as a Japanese death poem, the collective I of cattle, the immigrant I, the June bride I, the inmate I, the I’s inside the Great American Songbook, the “extraordinary flower” of Césaire’s I, the I as a painted mask, the I as Keats’s chameleon, the I as my most naked and awkward self, the I I was on Tuesday, the silent Troy of Darwish’s I, the I as yo, the I as tú, the I as el y ella—

About “Soul out of a Magician’s Hat”: I opened my book to the poem you reference and remember the word I originally had quotation marks around it instead of appearing in italics, so that the last couplet read: “So perishably lovely / the ‘I’ unpetaled.” Also, the poem had the line: “the pistil & stamen of the ‘I’” because I thought once that “I” resembled the sexual parts of a flower, a pictograph. I had trouble convincing anyone else of this.

Throughout this collection, your use of internal rhyme and half-rhymes—“leaving” and “loving” in “Errata”; “no reason” and “no right season” in “Havoc Yonder World”—gives your poems a driving energy that helps pull the reader along. How do you handle the push and pull between using sound and avoiding the kind of cloying rhyme that can often push away a contemporary poetry audience?

I have been staring at this question for 37 minutes while typing out the three words, “I love rhyme” before erasing them. Rather than using these three words, I’ll offer three separate thoughts.

1. Rhyme—end rhyme, internal rhyme, slant rhyme—has been chiming nearby throughout my life. As a child, I wrote poems because I liked the sounds of words and I found it fun to rhyme ocean with notion. As a mother to a son with autism, rhyme has been a kind of echolocation to find my way to him. When he was diagnosed at 4, he had little “functional speech,” meaning he would repeat what you had said, or speak in the borrowed sentences of books and movie scripts as he tried to enter conversation. In the year that followed, we would play a rhyming game where I would say a word and he would echo back another: fall/call, city/kitty. Something opened, not simply inside him, but between us. We built a window and we met there through that verbal playfulness.

2. Something about play, playing. That’s where poetry begins, no? Rhyme equals play. I remember the late Brigit Pegeen Kelly telling us in class that she’d come across a gloss on this Genesis line: “And the Spirit of God moved upon the face of the waters.” She’d read that an alternate translation for “to move” could be “to play” so that the Spirit of God played on the face of the waters, which in turn made the world.

3. If you substitute “the Lord” for “rhyming”: the good Reverend Brown says it best in this 13 second YouTube clip from Coming to America (1988).

Interviewer Todd Osborne’s writings have appeared or are forthcoming in The Missouri Review, The Collapsar, Arc Poetry Magazine, Juked, and Storm Cellar, among others. He holds an MFA in poetry from Oklahoma State University, and he is currently pursuing a PhD in poetry at the University of Southern Mississippi.