Today’s contributor to our Big Loves column is Paula Whyman. Whyman’s debut collection of linked short stories, You May See a Stranger, is out this month from TriQuarterly Books/Northwestern University Press. In the book, she follows Miranda Weber from her teens through her late 40s as she struggles with sexuality, marriage, politics, and the fate of her disabled sister. In a starred review, Publisher’s Weekly writes that these “smart, artful stories capture a woman’s life and the moments that define her.” Her fiction has appeared in many journals including McSweeney’s Quarterly, Ploughshares, and Virginia Quarterly Review. Paula is a Fellow of The MacDowell Colony and Yaddo. A native of Washington, DC, she now lives in Maryland.

We were nineteen. We were bad. We read Andre Gidé and struck elaborate poses to show that we didn’t give a shit about anything.

When I was in high school, I remember short stories being examined as if they were curios or warm-ups for the authors’ longer works. These were classic stories—“A Rose for Emily,” “The Bear,” “Barn Burning”—great stories, don’t get me wrong, but the message was that the novel was the real game: Faulkner and Hawthorne again, plus Dostoevsky and Melville. In college, there were more and more and more novels, in my case, 19th century English novels; novels by Conrad and Ford Maddox Ford; novels of the existential and the absurd; and, in a survey of American lit, novels by Didion, Bellow, Morrison, Vonnegut, Heller, and Roth. I had not yet read the short stories I could relate to, by Ann Beattie, Lorrie Moore, Grace Paley, and others; all of those would come later.

Then, sometime in my early twenties, I was working on the production of a free 600-page apartment shoppers guide, a job that still involved a linotype machine, paste-up, and bluelines, in an office like the one that later became a hit TV show. I was living in a government-subsidized apartment that was not advertised in the magazine I produced, and my main entertainment was seeking out the happy hours that served the best free Buffalo wings, which would become my dinner, while hanging out with other disillusioned and financially strapped co-workers. In other words, just when I thought my life could not be more absurd, I discovered the early stories of T.C. Boyle, and I nearly drowned in “Greasy Lake.” 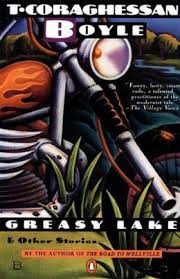 “Greasy Lake” is a story of teenage boys who want to be seen as bad, set out to prove it, and almost succeed. The narrator is a likable screw-up whom you root for even as he gets too close to the edge of “true” bad. After they run out of bars to go to and mischief to make, the boys park at a local lake where they unwittingly anger a dangerous character who’s making out with his girlfriend in a car. This happens:

The first lusty Rockette kick of his steel-toed boot caught me under the chin, chipped my favorite tooth, and left me sprawled in the dirt….The three or four succeeding blows were mainly absorbed by my right buttock and the tough piece of bone at the base of my spine.

This is not “A Rose for Emily.” Boyle’s stories are about regular people doing regular stupid stuff. To some readers the Technicolor language and lurid scenes seem over the top—the lusty Rockette kick? the favorite tooth?—but to me, this is the way a certain kind of clever boy that age will describe and embellish his experience.

Even when imminent danger leads the narrator to reach under the driver’s seat for his crowbar, he admits he’s never used it for anything but changing a tire. The boys skirt the edge of serious transgression when they nearly gang-rape a girl they call only “the fox”—the girlfriend of the mean character they’ve accidentally riled. That they are stopped just in time doesn’t make them less bad. But it does save them.

One of the features of T.C. Boyle’s stories that I’ve always admired: the inevitable downward spiral. As a writer, it can be hard to allow your characters to hit bottom. Boyle’s characters often don’t stop, they can’t stop, until the worst has occurred. But in “Greasy Lake,” they stop just short of it.

While hiding in the lake to escape from angry steel-toed boot guy, the narrator stumbles into the drowned body of a drug-dealing biker. Everything seems alive, even the lake, even the dead body:

[I] was pitching face forward into the buoyant black mass, throwing out my hands in desperation while simultaneously conjuring the image of reeking frogs and muskrats revolving in slicks of their own deliquescing juices.

A 19-year-old boy who summons up the word “deliquescing”? This feature of Boyle’s stories always gets me. His narrators may have poor judgment, but many of them have big vocabularies. They’re underachievers with a ready store of SAT words at their disposal. Sure, you could accuse the author of putting words in his characters’ mouths, but here, at least, the words fit.

The sheer exuberance and surprising sensitivity of this narrator strike me as distinctly contemporary and American. Will these boys become as bad as that dead biker floating in the lake? In the end, they pass on the chance. For how long? One can only guess.

Why love this story? For god’s sake, why not?