Today’s contributor to our Big Loves column is Nicky Beer. Beer is the author of two poetry collections, The Octopus Game (2015) and The Diminishing House (2010), both published by Carnegie Mellon. In The Octopus Game, Beer’s shape-shifting cephalopods visit the reader in films, dreamlike carnivals, and all the mysterious depths of our imaginations. Here, she discusses her big love for Yoko Ono’s Grapefruit: A Book of Instructions and Drawings.

Friends, I don’t think we talk nearly enough about how damn funny Yoko Ono is (I initially typed “Yolo Ono,” which proves that my fingers are much cooler than I am). In 2000, Simon & Schuster rereleased her Grapefruit: A Book of Instruction and Drawings in hardcover, first published on Ono’s own Wunternaum Press in 1964. The designation above the UPC code is “poetry,” and for a book whose accumulated contents were written over 50 years ago, it feels astonishingly contemporary, even timeless. But also, it will make you laugh:

Write all the things you want to do.

Ask others to do them and sleep

until they finish doing them.

Sleep as long as you can.

Write all the things you intend to do.

Show that to somebody.

Let him sleep for you until you

Do for as long as you can.

I can’t help but read “Room Piece” as a wry analog for modern dating:

When a room is needed, obtain a person instead

When another room is needed, obtain another

person instead of another room.

And who knew that Ono had predicted the invention of the Internet in 1963?

Poets: Read Ono’s instructions during those times when poetry is making you feel dull and 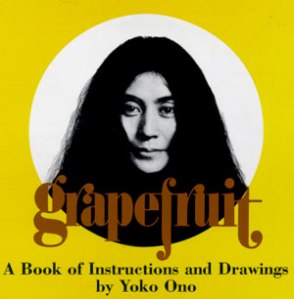 anxious and shabby, and you need something to refresh your palate (and isn’t it convenient that grapefruit season is at its best in February, just when the post-holiday blues set in?). Even as you hold the book in your hands—a cheerfully yellow, diminutive square—you’ll feel your attitude toward the written word recalibrate. After only a few entries, you’ll find yourself grinning, chuckling, or introspecting—in any case, you’ll find it a bit easier to get over your damn self. Treat it less as a book and more as a prescription for artistic malaise. The combination of Dadaist jokes, koans, and minimalist sketches will send you into an absurdist meditative state that you didn’t even know you needed.

People teaching poetry workshops: Use Grapefruit as a pedagogical tool. Take Ono’s impossible-to-execute instructions as imaginative prompts [“SHADOW PIECE: Put your shadows together until / they become one.”], and get your students to write their own. Give the more practical ones as homework assignments [“MAP PIECE: Draw a map to get lost.”]. Take your class outside and perform “Sun Piece” [“Watch the sun until it becomes square.”] for them. Listen to that one student get mad and ask if this means that anything can be art. Listen to that other student who dislikes him/her reply sharply. Listen to that other student who has a crush on either of them defend him/her accordingly. Allow the rest of the students to argue amongst themselves. Sneak away.

I close with an homage to Ono, written in the spirit of her own form: 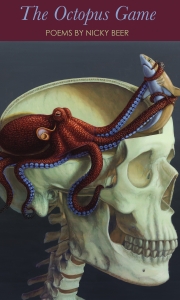