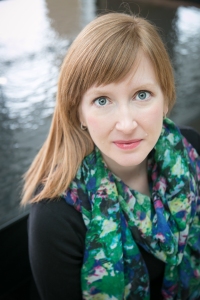 Double Jinx (Milkweed Editions, 2015), a National Poetry Series selection, is contributor Nancy Reddy’s first book of poems. “It hurt at first, having a body,” Reddy writes in “My Girlhood Apothecary.” The speakers of this collection’s taut, surprising poems respond to the vulnerability of female embodiment with magical thinking: they identify as wolf offspring, consider being forests, invoke the power of Nancy Drew. The poem “Lent,” which first appeared in Memorious 16, enacts the tension between personal mysticism with its seductive Christ and the adolescent asceticisms traditional religion inspires. Longing for elsewhere/otherness permeates Double Jinx: rather be… better to be… but the soft, evasive textures of wistfulness are offset by striking attention to form and play, arriving at an overall assertion of alert, gleeful, resilience. 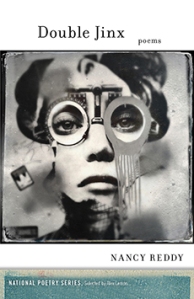 How did you arrive at the form for “Our Wilderness Period”?

“Our Wilderness Period” is a crown of sonnets that follows a settlement of pilgrims through their difficult first year in the New World. The poem originated with a phrase from a Lucie Brock-Broido poem, “a wilderness lord.” And that led me to thinking about the wilderness period – Christ wandering in the desert, a period of exile that’s the stopping point toward self-discovery. While the pilgrims as a group struggle with starvation and a sense that they’ve been forsaken by the god who propelled their journey, the speaker is tormented by a particular notion of her inherent badness – that she’s somehow the one who’s caused her community’s suffering.

In terms of the form, I’ve long been attracted to the rigor of formal constraint. (I have Jeff Oaks’s wonderful forms workshop at Pitt to thank for that.) I think I took on the crown of sonnets initially as a formal challenge – a kind of dare to myself. I’d watched Rebecca Dunham craft a knock-out sonnet sequence (it’s in her book Glass Armonica) on an email poem-a-day we were doing, and I decided to take on a slightly more modest version of that. The crown of sonnets, like other forms that repeat lines or phrases (villanelles, pantoums, sestinas) requires play and attention to detail – how much you can alter a line while still keeping it close enough to echo across the sequence. And the sonnet sequence lends itself to narrative, but also, I think, a certain sadness and stuckness, since the poem ends with a variation of its first line.

“Better to be a forest instead…”; “You’d rather be a hayfield”… “my father was a wolf”.. it seems that nonhuman alternatives to (female) embodiment hold appeal for Double Jinx’s speaker. Can you talk about what the nonhuman as an alternate identity allows you (and your speakers) to do and say?

I love this question, in part because my doctoral research (I recently completed my PhD in Composition and Rhetoric) examined the role of the nonhuman in supporting extracurricular writing. (In other words, I looked at how desks, weather, landscape, and other nonhumans make writing possible, particularly for those without institutional support for their writing.)

I hadn’t thought quite so precisely, though, about the role of the nonhuman in my poetry, but you’re exactly right. Girls in this book are always turning into other things – birds, often, but also trees, flowers, a mimeograph – and I think this must have to do with the limited identities available to girls in our culture. One speaker, in the poem “Lucy in Chrysalis,” decides that she’s “sick / of being a girl” after she realizes she won’t turn out to be Cinderella, won’t find out she’s secretly been a princess all along. So those nonhuman alternate identities offer additional possibilities. And adolescence is so strange, anyway – it makes a certain sense to want to become a hayfield, or a grocer, or an acrobat – any number of those are preferable, at least on certain days, to being a teenage girl.

I found myself emotionally riveted whenever your reimagined vulnerable and brave Nancy Drew figure came up. “She’s off the plot”, indeed. Apart from the shared “Nancy” name, do you feel—as writer, woman, or both— some kinship to Nancy Drew?

I read the Nancy Drew books growing up, of course; my grandmother had a stack that had belonged to my mother and her sisters, and I read those while visiting her. To be honest, though, I really got interested in Nancy Drew as an adult. They’re actually quite strange stories! Nancy’s always in disguise, and there are all these cases of mistaken identities. I grew up in a family that valued ladylike behavior in its women, and perhaps Nancy is appealing because she’s always pushing at the edge of that. Her transgressions are so precise – she’ll ignore the chief of police’s warning to not pursue a dodgy character into an abandoned building, but she does it politely. And her hunches always pan out. She’s always the smartest woman in the room, always the propulsive lead in her own story.

After I wrote the first Nancy Drew poem, “The Case of the Double Jinx,” Quan Barry, who was one of my professors in my MFA, read it and said, “needs more sex.” And so I wrote “The Secret Nancy,” which became the last poem in the book. The Nancy of the book is such a good girl; it was fun to imagine her getting to have a little excitement after Ned’s been dispatched.

“Her story rises / like woodsmoke / from these fractures”, you write in “Inventing the Body”. Is this an apt description of the relationship between your own autobiography and this book’s lyric mode?

I’m typically a bit hesitant to talk about autobiography, largely because I find that the question is often aimed at finding out what really happened, and it’s always my hope that the poems themselves are more interesting than whatever autobiographical details they may happen to contain. I grew up Catholic, but the poem is not, for me, a confessional. (Aimee Nezhukumatathil’s great poem “Are All the Breakups in Your Poems Real?” is a great take on this subject.)

Of course, you’re not actually asking if the breakups (or the beatings, or the birds) in my poems are real. I’d say, in these poems at least, that the relationship is actually the reverse – that details from my story, as well as stories I’ve collected, are scattered throughout the poems. Often a memory or an image will incite a poem, but I depart from there. So while it’s true, for example, that my father did often say my sisters and I were like crows, no one ever actually turned into one, as happens in one of the early poems in the book.

Interviewer Sarah Green is the author of Earth Science, forthcoming from 421 Atlanta, and the chapbook Skeleton Evenings (Finishing Line Press 2014).