It is the last day of 2014, and we have just posted the newest issue of Memorious, which has our first interactive poem– Nomi Stone’s “Quadrant,” in which you can step into different parts of the US military’s mock Middle Eastern villages where they train soldiers– as well as work from a range of poets and fiction writers, including Catherine Breese Davis, Cathy Linh Che, Robert Wrigley, David Rivard, Cori Winrock, Austin Segrest, Virginia Konchan, and Craig Bernardini. But as we wrap up a wonderful year that included two new issues and our tenth anniversary party at AWP Seattle (thanks to all who came to celebrate, listen, and dance with us!), I’m already eager to get my hands on the books to come in 2015. As always, my list is dominated by our contributors, and, as always, it would take too long to list all of our contributors’ forthcoming books here, but we will be sharing their good news, and new books, throughout the year. Meanwhile, here’s a little taste to get you pre-ordering and planning your reading for 2015! Happy New Year to all of you!

Rick Barot’s new book, Chord, comes out from Sarabande Books in the summer of 2015. This new collection includes a poem from Memorious, Child Holding Potatoes , which brought us our first appearance in Best American Poetry. The sample poems he has online at his website are all terrific: take a peek and start counting down with me to the pub date. (You can even pre-order the book as part of Sarabande’s nicely priced 2015 subscription, which also includes another book on my list!)

Contributor Andrea Cohen’s fourth collection of poems, Furs Not Mine, is the follow-up to her memorable third collection Kentucky Derby(Salmon Poetry). Cohen’s poems both talk to you and skew the world a little more interesting, and her blend of wit and warmth makes poems that stick. We’re glad Four Way Books has decided to publish this, and her fifth collection, due out in 2017. They’ve given us a lot to look forward to.

Many of our staff members started as contributors, and this includes contributing editor Adam Day, whose debut collection, Model of a City in Civil War, will be out from Sarabande Books this year. His chapbook, Badger, Apocryphia, was selected by James Tate for the Poetry Society of America 2010 chapbook series, and many of us who have been reading his poems in journals since then have been waiting to see who will snatch up his first collection. Sample a few poems at Verse Daily and Typo.

My heart started racing when I saw that Alice Fulton has a new collection, Barely Composed, coming out from Norton in February 2015. It’s hard to believe it has been ten years since Cascade Experiment: Selected Poems, although of course we’ve had her short story collection The Nightingales of Troy in the meantime. While you’re waiting for your copy to arrive, check out our interview with her in issue 15 in the archives!

I’ll admit, I’m a little late to discovering Rachel Eliza Griffith‘s work, but her fourth collection, Lighting the Shadow,  is also coming out with Four Way Books, and I am taken with the mythical and gorgeous qualities of the poems of hers I’ve read online. It’s not surprising, after experiencing some of her breath-stopping imagery, to learn that she is also a photographer.

Sharma Shields‘ imagination and vivid worlds first grabbed us when we published her back in Issue 2, in 2004. I am excited to see the buzz building for her debut novel, The Sasquatch Hunter’s Almanac, forthcoming from Holt this winter. (Although we have to wonder why Library Journal feels the need for a list “Books for Dudes” list, we are happy to see “dudes” getting encouraged to read this novel along with the rest of us. And we could never have imagined that one of our contributors would make EW’s Breaking Big: 25 Stars on the Rise in 2015 list!)  The Sasquatch Hunter’s Almanac is her follow-up to her story collection Favorite Monsters and it follows the life of a boy whose mother may have abandoned him to head off with Sasquatch. 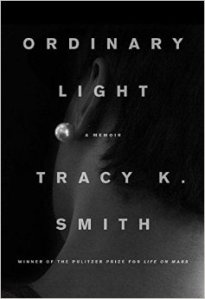 A poet who will be delivering some prose in the new year is Tracy K. Smith, whose memoir, Ordinary Light (Knopf,  March 2015), traces her coming-of-age, including her transformed experience of the world after visiting family in Alabama. I’ll confess, I’m restless for her next book of poetry, too, but I am also very eager to see what she’s done here.

You may be familiar with poetry contributor Jennifer Tseng’s two books of poems, The Man with My Face and Red Flower, White Flower, but this May, Europa Editions will bring us her first novel, Mayumi and the Sea of Happiness. The story of a forty-one-year-old librarian’s relationship with a seventeen-year-old boy in a small town on Martha’s Vineyard, this novel looks to be on some level a book about books.

I’ll also be on the lookout for these new contributor poetry collections: Dennis Hinrichsen’s Skin Music (Southern Indiana Review Press), Cecily Park’s O’Nights (Alice James Books), and Todd Hearon’s  No Other Gods (Salmon),  as well as contributor Benjamin Percy’s  newest novel, The Dead Lands (Grand Central Publishing), and contributing editor Laura van den Berg’s debut novel Find Me (read more about this in Barrett Bowlin’s Anticipated Book’s list). And yes, 2015 will bring us the new Toni Morrison novel God Help the Child! Is there a better grand finale to the list than that?

January 7, 2015 additions: There are so many books that should be on this list and aren’t- 2015 has much to offer! But two of the many I missed here are contributor Jehanne Dubrow‘s fifth collection of poems, The Arranged Marriage (University of New Mexico Press),  and Emily Gray Tedrowe’s Blue Stars, which I have been waiting for since reading her debut novel, Commuters, and which comes out from Harper Perennial in February 2015.

And finally, one more fiction selection: Patricia Park’s Re Jane (Pam Dorman Books/Viking/Penguin ) is a retelling of Jane Eyre as a mixed-race Korean orphan in Queens. It looks like we’ll have to wait for this one until May 2015.

-Rebecca Morgan Frank is co-founder and editor-in-chief of Memorious. She is the author of two collections of poems, Little Murders Everywhere (Salmon 2012), and The Spokes of Venus (Carnegie Mellon, forthcoming 2016).

For original poetry, fiction, and art, check out  our new issue of the journal at www.memorious.org.